While Blademasters are by no means my strong suit, there hasn’t been a guide for them since 1.5 launched. So, I’d like to try my hand at covering the basics for aspiring bladed harbingers of death.

But before I do, obligatory disclaimers.

Disclaimer: As 2038 progresses, much of the info in these guides is very likely to, or even bound to, not apply in the future.

Disclaimer #2: This build is very focused on one specific purpose. It may not be the most fun route to take while leveling, and you may want to just use it as a rough template and spice it up accordingly.

Next, some generally useful notes for newer players.

#1 The skills and expertises

Before delving into gear, let’s begin with skills. Those will inform many gear choices and vice versa, and they help frame the “one-trick pony” nature of this build.

This takes the following gear for granted:

The main spam skill of the build, and one of only 2 offensive skills you’ll be using – unless you spice up the build with more. Maxed for maximum damage.

SS can be used while leveling as an extra AoE skill, but here it’s mostly used to access Whirlwind. Now, Whirlwind won’t be used as a single-target damage-dealing option, and using splash swords with SoJ can provide some splash damage. However, it’s handy for mobility, some additional AoE damage, and power management.

You may either max it for userate, or skip the investment and just grab it through gear for a farming skill.

Note that this Surge scales to max hp, so stacking +STA/+hp/+hp% can facilitate tankier builds effectively.

The former is used as a prerequisite for the latter. The class can definitely support crit-based builds, but this build just needs Crusader Wrath for its massive damage bonus.

SoJ can proc Surges rather reliably on its own, so this passive boost to Surge proc chance is highly optional. This build invests a single point in it to benefit from +1 AS.

One point in this allows dual-wielding, and further points grant WILL. It benefits AoP, and it can be a blessing with how draining SoJ spam is. However, you may have enough power regen from other sources to just need the one point in this skill.

The main aura of this build, AoP counters the massive cost of spamming SoJ. Keep in mind that it scales to max power, so any WILL/+power options let it perform better.

Finally, this aura provides amazing protection in general and in specific encounters; Dreadnaught, Imhotep, and so forth. You may use rings and/or a cast set for this aura instead, such as Grimaces, since it maxes at 5.

Lastly, in terms of skills, the build depends on 2 pieces of gear for some very useful skills.

Archangel Gliders provide this skill. PoR provides an excellent mobility option and a panic button. You can invest hard points to get it, of course, should you choose to use other boots – but the cost is relatively steep for 1 point.

Hamper serves as another means of boosting damage, by lowering enemy armor. Hamper also benefits your parties, of course. This build uses a cast set for a total of 7 points (3+3+1), which isn’t notably worse than maxing it. You can use such gear as The Edge of Abbadon as substitutes until you get +3 swords.

With skills covered, let’s delve into expertises. My 5 choices for this build, in order of importance, are the following:

Of course, investing in Tranquility and Enhanced Willpower is only as essential as your power needs. The latter is taken for its benefit to AoP, and both may be swapped for other options if you don’t need more regen; Surgical Precision (+4% crit chance) for crit builds), Enhanced Stamina (+16% hp) for high-hp builds, and so forth.

Now, it goes without saying that a +1 to all skills ring can help the build expand more. Similarly, cast sets can be used for more skills than the above. However, that part of spicing up the build I’ll leave to players’ tastes, since massive gear dependencies are never fun for many. Still, the class has a few gear choices to consider.

While Defender and Order pieces can also be useful, and even built around, the 2 armor pieces this build will focus on are Swordman and Seraphs. The former provide inherent +melee speed, while the latter provide massive shields. While dismissing Seraphs regardless of shields should be easy for many, some Seraphs also provide notable +skills, +stats, or offensive bonuses.

So, while +stat Mythic Swordsman gear may generally be optimal for most slots in terms of damage, you may consider mix-matching a few of the above.

Next, as far as survivability goes, the class has a few different routes to consider.

+Duration of boost skills and thorns

Notably, +duration of boost skills can also benefit the class quite visibly. This affix can increase the duration of Sprint for more mobility, as well as Surges for potential unlucky streaks (or more Restoration uptime for hp-focused builds).
Finally, and perhaps most notably, it also increases the duration of Crusader Wrath; in this regard, +boost directly translates to increased damage.

As for thorns, it’s beneficial to have at least one source of it across all gear. The reason being, thorns can trigger Surges through being hit in melee, increasing total uptime/proc rate. Do note, however, that there’s little point in stacking them; a single thorns affix will suffice for this use, regardless of damage type.
Lastly, do note that this interaction requires at least one sword to be equipped, which is the requirement for Surges themselves.

Finally, the question of mitigation vs damage applies to stat priorities as well.

Next, the class has a few different options in this area.

Out of rings, the main options include:

Finally, in terms of swords, the fastest swords tend to deal the most damage. However, there are a few viable options to consider while leveling and farming.

As far as single-target damage is concerned, however, there are two main options for this build (and most builds):

Notably, Grimace and other Gleamcarvers can facilitate crit builds much better due to their 5 max slots. However, this build doesn’t focus on crit, so the two options above are superior here.

Finally, since power management is such a crucial point for this build, I’d like to devote a whole (small) section to it. Of course, Power Injectors and Restoratives can help alleviate the situation somewhat, but the drain of SoJ cannot be overstressed. There are 2 main ways to reduce power drain in this build; reducing skill cost, and buffing AoP.

SoJ does cost “just” 30 power per use, but it’s still immense for a spam skill. As such, you can use –power cost of Swordsmanship skills to reduce the individual use cost. This affix can be found on the following:

For exact values across different levels and augment grades, please refer to the wiki page on affixes.

Finally, you may indirectly buff Aura of Power through a few different sources:

Of course there are other achievements that can also provide +AA, +WILL, and +power; “Fashion bug”, “You found a what?”, and “There’s no place like it”, respectively. Please refer to the wiki page on achievements for those, to plan your achievement slots according to your needs.

In conclusion, this build allows the class to be a very powerful one-trick pony. There are of course other ways to build; crit builds, Flying Blade builds, even sfx builds with Aura of the Elements. This guide should help as a rough template for newcomers, while giving enough room for creativity and tweaks.

As a testament to this build’s efficiency, I’d like to finish with a video of a rather sloppy Moloch run. Note that this performance was achievable with only 300 STR, clean Hikida’s, and a few suboptimal armor choices. Skill-wise, it was identical to this build, with the exception of abandoning Whirlwind for lv8 Hamper through hard points (which you can absolutely avoid).

Thank you for reading, and happy demon slaying!

Quick sneaky edit to include the importance of +boost.

about power management - i’ve been told that spamming power injectors together with crafted restorative should allow continuous SoJ spam on it’s own. dunno how accurate it is and i usually dislike using consumables, but after getting used to slamming those un-SFXers, i also becase a power injector addict

mixed with occasional Whirlwind (got in from a unique sword), it suffices for levelling.

That’s a fair point. I also hear that many endgame players don’t fret about power management as much, but I’ve seen a few who do so I figured I’d cover it properly.
I wasn’t terribly confident in suggesting more intricate builds either, and I know a few people might be crafting up their own. So might as well leave the deeper stuff to resident BMs at heart

What do you use in the achievements slots?
BTW thorns on gear can trigger Surges. I am not sure if they have to be physical.
Can you show the gear from the video please?

What do you use in the achievements slots?

I use +AA, +STR, +STA, +WILL, +8% power. Caste damage can substitute for one or two of these depending on the encounter, as well as plain +damage. +WILL does take a while to farm, so there’s a few options there like +30 power from “There’s no place like it”.

BTW thorns on gear can trigger Surges. I am not sure if they have to be physical.

A very good point, although I must note that they need at least one sword to be equipped to do so. Thanks, I’ll add a note on that.

Can you show the gear from the video please?

I’m afraid I’ve since changed it quite a bit, as I look into bits and pieces as they come up. By memory, it’s the following with +stat or +boost augments:
Angelic Visage with +1 AS
Archangel Wings (suboptimal, yes)
Mir’s Anger (also swappable with a better Mythic)
Archangel Cincture
A Mythic +stat Kakozuri
Hands of Heaven
Archangel Gliders with +movement speed 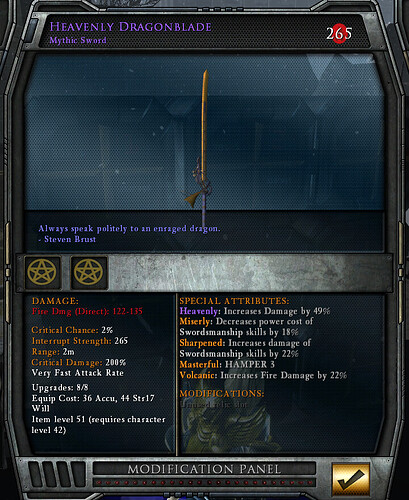 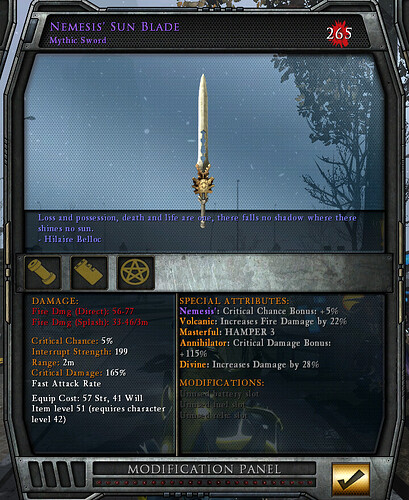 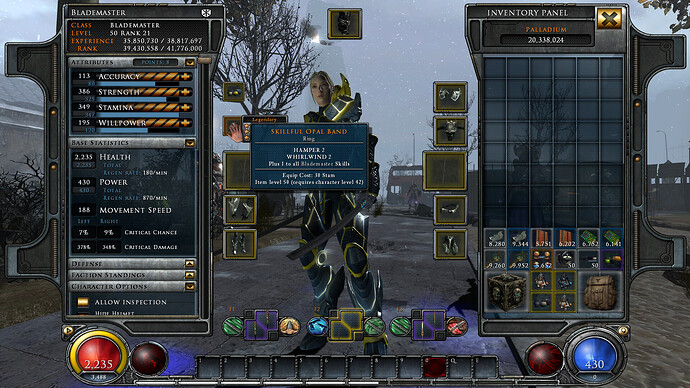 Those are awesome, many thanks for your work

The ring is on a level of its own, of course. Truly excellent.