This might be the shortest diary yet, I’m afraid. I’ll still crack some daft puns, because for some reason you lovely people seem to like these, but be warned. As regards the briefness, not the puns. Well also the puns, if you don’t like these.

In brief, very little happened over these past two weeks. We’ve all had to lean into our RL work more heavily, which meant there could be little progress here. Still, let me relay some roadblocks we’ve been frustratingly stuck on for additional sadness points:

BUT, not all was lost, for I found a different solution for the time being.

So, exhibit #1; a Bughive sword. For the uninitiated, Bughive is that infuria…interesting enemy affix that has them reflect stinging bugs upon you on hit. Hence the title, yes. 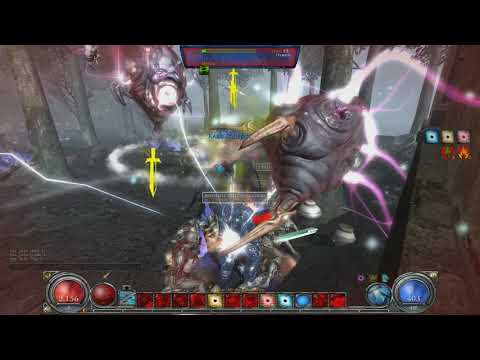 As you can see, this thing is very, very interesting when wielded by players. It’s not the most devastating effect in the world, sure, and for Blademasters it kind of goes against the mantra of, um, avoiding hits. But it does, interestingly, offer a great counter to those pesky Orbiles – or any enemies addicted to constantly hitting you.

This is a proof-of-concept prototype, of course, so please don’t expect it to necessarily be released in this form.

Now, exhibit #2; a stop sword. It’s a sword that stops, and that’s it. Granted, there’s precedent for this for the faction in R. J. Donald’s Diplomat, but this one is a sword – so it’s subject to different black magic-style multipliers. For that reason we’re off to a cautious start, lest enemies get stopped too often before being slaughtered, so.

As you can see, the stop strength as it stands is rather low. The conceptual reason for this is that, well, a sword also deals damage and applies sfx, synergizing with the Templar skillsets - unlike Diplomat’s, which is kind of there to just stop things en masse. Yes, Anchor helps it, but there’s no Diplomat Sword Typhoon.

Again, a prototype. This one’s fairly lackluster so far, so it will likely see changes before release.

…I must bid you farewell. I know this entry was probably lackluster, eye candy aside, but work sometimes gets in the way. We’ll hopefully be seeing some developmental milestones soon, which should allow us to finally steamroll these roadbumps and release all the stuff we’ve been sitting on. But until then, I wish you all the best

first! even before the Discord notification!

“bughive sword” makes me think of an ability from another game - the ability is called “hive master”, it’s passive in a sense that player doesn’t activate it themselves, a tanky character owns it and the ability itself makes a vampiric bug zoom from the hero to an enemy an back again, stealing blood from enemy with each bite and bringing it back to heal the owner with it.

btw, hive shield would make more sense IMO, but anyway, it’s kinda cool to have this kind of functionality be available to players. now if the swarms could also look different…

Sounds like the start of a reflect damage based char, could be very amusing

I like the stop sword alot more like the necrosis gun because i made the experience that i need some form of additional defense mechanism on my squishy userate blademaster if i dont want to go bankrupt on pots. That is on a sword throwing BM. Last time i added stun to the sword and it worked well so stop should be an alternative.

The maps thing is kinda sadge but it is what it is. One would have though just do random maps with random encounters spice it up with some modifiers and there you go, poe style mapping. But yeah, i hear you and can imagine how complicated stuff get with code that old and obscure.

Just had an idea about the reflecting mechanic. Thornes surges that can be released like the heal surges for both BM and GD. You build up additional thornes by getting hit instead of hitting (or maybe GD- getting hit and BM hitting). And an additional skill releases them for a blast.