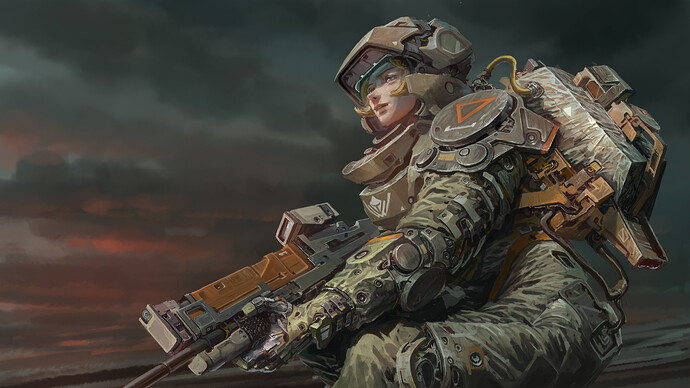 Ones again its more a “Look what i made” then a class suggestion.
The concept was simple but this was most likely the hardest one to make of the three.
To make this class, the choice of sound, animation and timing had to be done right.
I had the audacity to mix some skills up, this means it would need a lot of work to create those skills.
But, gosh darn, one in particular i would give idk what to see that ingame.

The Heavy Striker is specialised in heavy Weaponry. He is a walking Siege with his C.G.S, wich stands for Controlled Gravity SiegeKit. It is made to fire with massive power without breaking your bones.

The invading hords of Demons made it hard to hold the ground and the lack of knowledge even harder to go precisely against them. But who needs precision when you always hit, no matter where you shoot.

The Heavy Striker where the madmans under the soldiers, they run second to first to the masses, activating the C.G.S and holding the ground with the Templars on the front.

Nobody knows if its pure hatred against the demons, what they did to them, to the World or if they just having a blast.

The idea was to make slow weapons attractive. This was also to make it easier to rebalance slow weapons by giving them a certain element typ or by letting them fire multiple projectiles like shotguns.

By reducing the rpm to 60 you are forced to use slow weapons and i was able to balance the hole class around it. The same with crit. Without crit you have more gear and weapon choices.

Multiple bullets / hits with one shot, weapons like shotguns and some launchers, was where the MIRV-Bullets and the Mana = Magazine idea came from.

Multiple hits makes MIRV a very strong skill. Extra bullets benefits these weapons even more then others.
With the “Reloading-Bullets” skill, wich gives you power on hit, fills your power fast enough to use them as soon as they are ready.
Giving it an adventage over single bullet weapons like Snipers or Thermal Cannons.

The C.G.S is inspired of an old online game.
The Design was, dont just shoot, use the C.G.S, support others, be a beacon for your party members and
Plant yourself tactical, you are vulnerable in it.
You should feel like you are about to bring out the big guns.
And it also changes the gameplay of your party. They want to stand near you to get the benefits.
It also should feel, during leveling, good to “upgrade” your C.G.S.

The thought about Ammunition was to make you more active by changing the Bullets and giving you choices, you can adapt on the fly.
To enhance / change / adapt for every situation during combat wihout interrupting it.

As you can see, the Skill-Tree looks kinda weird connected.
The idea behind that was, that you have to put points into “Ammunition-Mastery” and still have the free choice over wich Bullets to spend points into.

Why was it important to force you to put at least 1 point into “Ammunition-Mastery”?
Then your rpm is limited to 60 and you cant abuse high crit speed weapons with MIRV and such.

I wanted good feeling skills, you should feel like somone with big guns.

I over did it.

You cant emagine how much work that was, testing every weapon, sound, timing / interval, animations.
Open other Games checking out how they doing it and the list goes on.
I did that because i find it most important, that it feels right, to fire a heavy weapon.

I did put two “Oh SHIT!” buttons in, just in case you misjudged your planting.

I made them all Tactical skills. Because you dont need crit, you can use Tactical cooldown reduction armor.
Its just to give you a bit more choice in gearing.

You dont crit, why going acc. and why should you try to reach high acc?
The " Doubled Precision" and “Elementary Precision” Passives where the answers to it.

It was to make Acc. interesting again.

The Ammunition and C.G.S idea i like the most and working even outside everything else.
Not the rpm or crit reducing part of course.

Done!
Hope you liked it!
Suggestions for changes and such are welcome.

This actually hits fairly close to my old concept of a ranged tank Hunter. Not quite the same, but I still like that the role is unique enough for it to have a unique identity.
Never mind the effort to make slow guns appealing through unique effects, which I also find very justified and interesting.

This actually hits fairly close to my old concept of a ranged tank Hunter.

Do you have a link to that, maybe i have even read it and cant remember, was that in this forum?
Would be interested to what your idea was.

Do you have a link to that, maybe i have even read it and cant remember, was that in this forum?
Would be interested to what your idea was.

It was never made public that I know of, no. But it’s been sitting around for a good 3 years now, so might as well. Here it is.
Kindly note that this was a rough draft that’s more concerned with “how can we faithfully use FSS’s assets to fit a tank role, since there are(/were) few tankers - and them giving Strikes to the other two Hunters diminishes the Demolition role anyway, while we can’t reasonably remove them 10 to 13 years later” than with “what’s the complete gameplan for this class from start to finish”. Also, the skills mentioned there by name are all FSS’s, with mechanically possible suggested additions of my own only framing them as the core.

Funny, i see a bit more the Rift Walker in there but that might well be because both are melee range chars.

To the stealth mechanic, couldnt you just give him an aura wich deactivates stealth if X amount of enemies standing in? Then you could make skills wich increase the number and reducing the radius of the aura.

I know, you just wanted to use existing assets. It just went through my head.

an aura wich deactivates stealth if X amount of enemies standing in? Then you could make skills wich increase the number and reducing the radius of the aura.

Funnily, the stealth system (not to be confused with Escape-likes; this is a seemingly incomplete existing system) is somewhat more refined already. Assuming I understand it correctly (not a dev), enemies have a literal perception check against the player’s stealth, and the plan was for player skills to improve the reveal “roll”. The latter part obviously doesn’t work, but the former already (somewhat) does.
So yes, it’d definitely be feasible to patchwork around it, but my hope was to make as much use of it in its base form as possible.

You cant emagine how much work that was, testing every weapon, sound, timing / interval, animations.

so, is this class actually playable somewhere?

also, cool stuff! i recently made up some skill descriptions similar to yours, but nothing as coherent and, i think, i went a bit overboard with complexity.

is somewhat more refined already. Assuming I understand it correctly (not a dev), enemies have a literal perception check against the player’s stealth, and the plan was for player skills to improve the reveal “roll”.

but my hope was to make as much use of it in its base form as possible.

Yeah, i just wonder if it feels good in an action rpg, just because you can make it doesnt mean you should do it. °cough° escort °cough°.

I’m thinking about which arpg’s stealth have, the good thing is, that Hellgate is in 3. person.
This makes it more open for mechanics like that.

Hm i think it just depends on the cooldown of stealth. I mean when a Guardian and BM can go through why not the hunter.

Edit: OHHH i remember, guess wich game has some sort of a stealth mechanic: Diablo 2.
The Assassin with “Cloak of Shadows”. She is basically invisible unless she is near the enemies.
And its pretty good.

so, is this class actually playable somewhere?

No, i tested it with all the other weapons and skills in game. I Took a stopwatch, made videos of firing the weapons and have them next to each other, stop one after a certain time of shooting to start immediately the other with the next gun to see how that would look, feel, as if it where one skill.

That sort of stuff.

i went a bit overboard with complexity.

I know that feel, i did that here too.
Its hard to hold back. Its just something you have to learn.

By the way you also can do icons of your own. It isnt that hard, i didnt made stuff like that ever before and i did them with Paint.

Reads nice, would love to give that a go

I’ve been working on some stuff myself which the dev team are aware of which is in this vein. I look forward to more development on this.