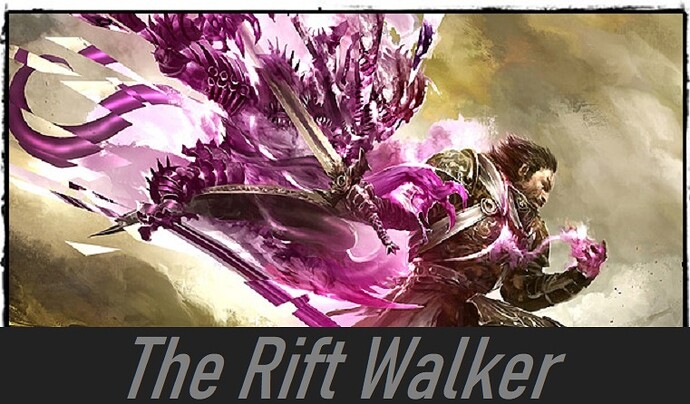 The first thing i want to say is, i got the idea for the class a looong time ago and im still not to 100% happy with it, and this is more a “Look what i made” then a class suggestion, especially because the mechanic to wield a Sword and Focus at the same time doesn’t exist.
I noticed that i used the terms Spell Blade and Spell Sword. Spell Blade is a Blade master who uses magic. Spell Sword is a Mage who cast Swords.

The Rift Walker is a Cabalist who learned how to create rifts to the arcane plains of Hell, to strengthen his power. He can hold this power or unleash it upon his foes.
He is a Nimble fighter who relys on his Shields an Sfx defences instead of life and armor.
He also sliped over a puddle of spectral glue, landed face first on the ground and found a sword.
At this moment he knew, he needed a shower.

The Design here was to create a nimble, Sword wielding, Cabalist who uses Shields and Sfx as his main defence. I also wanted to mix the Blademaster with the Arcane Evoker together to create a Spell Blade.

The idea about Charges was, not only to make him more active but also to give him a choice.

You are stronger by holding them but you can spend them for powerful spells in exchange of being temporary weaker.
Some spells become stronger for every Charge you spend on them, wich means that even after the cooldown you might not use the skill immediately because you want to get more charges first, to unleash the spells full potential.

Phasing should be his absolute main strength. Mass phasing and Boss phasing for him and the group.

Spectral is hardly present among the classes. We got Spectral Bolt and Hydra (We dont talk about leash).
Other then that the classes have one or two spectral skills.
This i wanted to change.

The idea was to use the Sword stats for everything you damage with your Sword.
And likewise with the Focus.

In this way, you would not just use the Focus as a bonus but as an actual Weapon.

I kinda tried its not done, its hard to theoretically balancing something wich you can’t interact with.

What stung me was the thorns mechanic. Therefore i changed the “on hit curse” to “dealing dmg with your sword”. You should curse your enemies by actually hitting them and it makes splash dmg swords good for cursing.

This post took waaaaaaaay too long to make. I hope you liked it.
I mostlikely wanted to say more about my design choices but this took as i sayed waaaaay to long.

You can also help me with NAMES! I didnt thought it would be so hard to name the skills and trees.
Im also open for suggestions and such.

PS: The picture above is from Guild Wars 2.

This is extremely well done. It shows that

I can’t process it at the moment to chime in properly, but I like the basic concept. It’s an interesting direction, and tying a class to a damage/sfx type so strongly is also intriguing.
My only concern is that any class beyond the 3 unreleased ones essentially forces us to make 2 more for the other factions. Otherwise, I’m all for new classes either way. And this one is interesting, especially in that it mostly seems to be using existing mechanics in new ways without becoming too complicated.

especially in that it mostly seems to be using existing mechanics in new ways without becoming too complicated.

That was one of the concept pillars i made, “how to make it without creating new mechanics”.
Thats why you dont get a bonus from wielding focus and sword at the same time, like double focus or swords do.
Instead the strength you miss out is given into the skills to make them even more attractive.

My only concern is that any class beyond the 3 unreleased ones essentially forces us to make 2 more for the other factions.

You could also put one new class into the game and then the others during the next 4 years or so.
Or ask me for the concept and skilltree design. Where is my kappa emote?

During the makings died ~20 Icons…
Its fine i made in two days ~200.
Granted, a lot of them are "how does it looks like if i do the sword/focus in this corner or this one.

This one as an example was the second icon i made for “Lashing Sword”.

But i had sometimes the feeling it doesnt look like swords, so i decided against it.

Wow this is cool, good job.